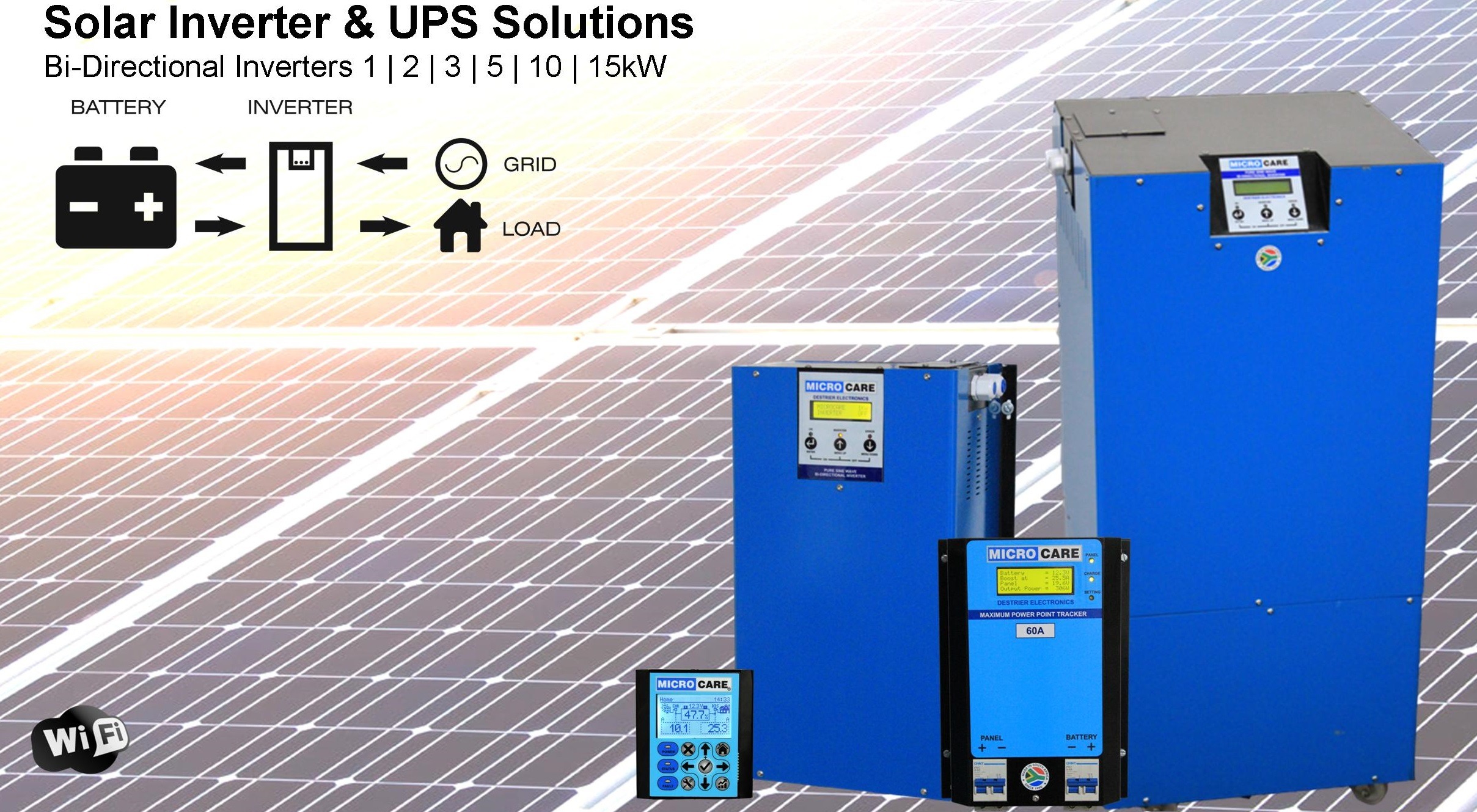 All Microcare Inverters are Pure Sine Wave Bi-Directional Inverters designed to obtain the op mum Inverted power from the installed Solar System. Microcare Inverters come with the latest software to improve the automatic change over from the grid to the Inverter. Cutting edge so ware innovations allow for uninterrupted supply to a range of applications from a sensitive server room to industrial machines. The Inverter is able to anticipated load failure and pre-charges the circuits for rapid transfer of power and change-over up to 4  times faster. When  the  grid  returns  with  a   fluctuating  supply  voltage,  the  Microcare  Inverter  can  delay  the change back from batteries to grid to allow the grid to stabilise to avoid possible damage to the load. 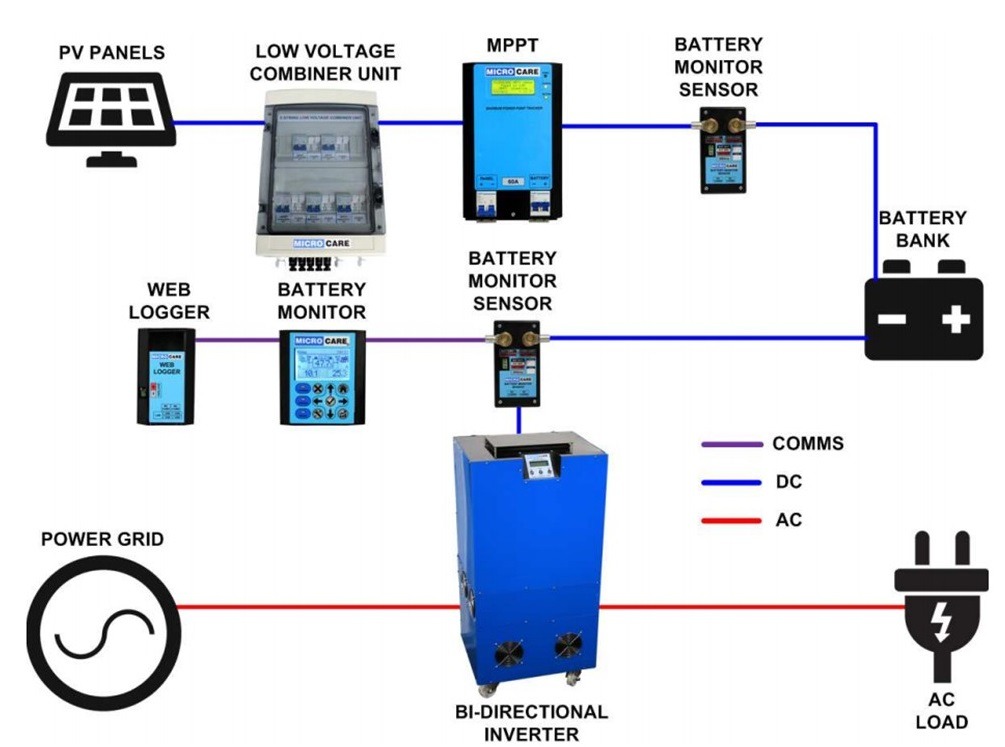 For customers looking at electricity cost saving on their monthly bills the Microcare Inverter is also a fully grid-interactive solar Inverter when switched into Solar Control Mode. The Inverter will use solar power when available and also store the excess solar power in the batteries for night time use. Once all the solar power has been used the Inverter will automatically switch the load back to grid power for the rest of the night until the sun comes up the next day again where the load will be automatically switched back to solar power. At no stage will there be any excess power to be fed back to the municipal grid and the system can safely be installed with any grid connection. 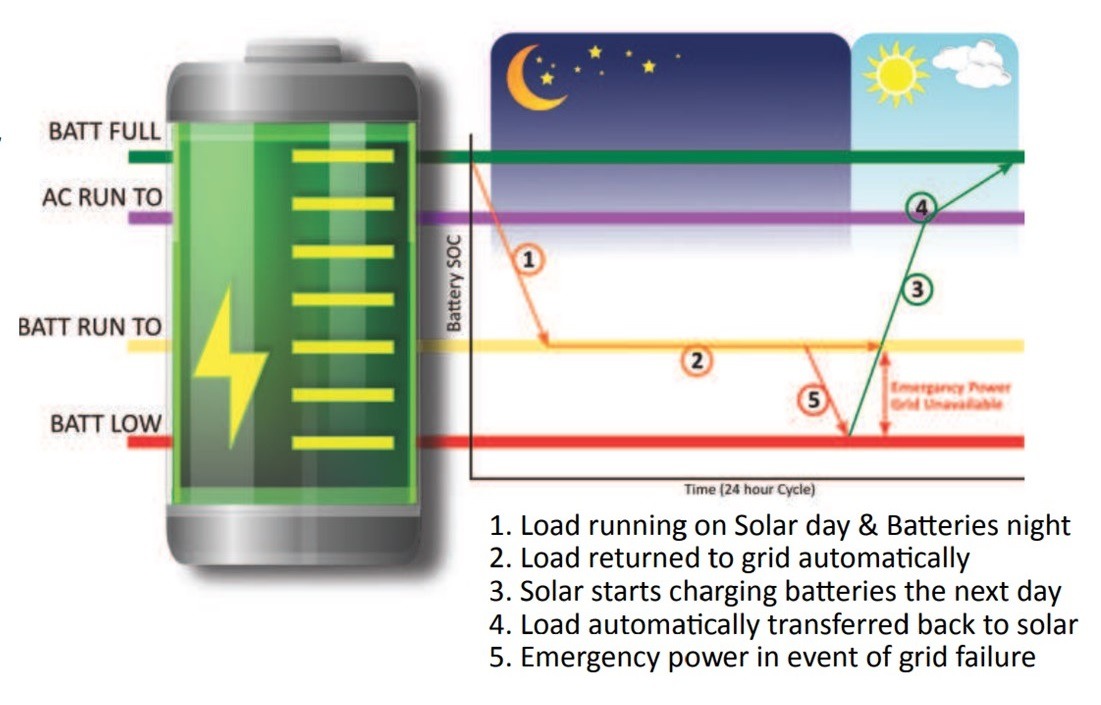 The power usage priority of this grid interactive system is 1st – Solar Power, 2nd – Battery Power & 3rd – Grid Power. If the grid fails at any stage the batteries will be used and discharged using the stored emergency power supplying backup power to the load.

The Microcare Inverter also has Grid-Assist functionality meaning that a load of up to 200% can be run through the Inverter with the assistance of grid power. If a peak load is required greater than what
the Inverter is capable of supplying the Inverter will switch that load automatically back to the grid for assistance. When the peak load reduces the load is transferred back to Solar / Battery power again. 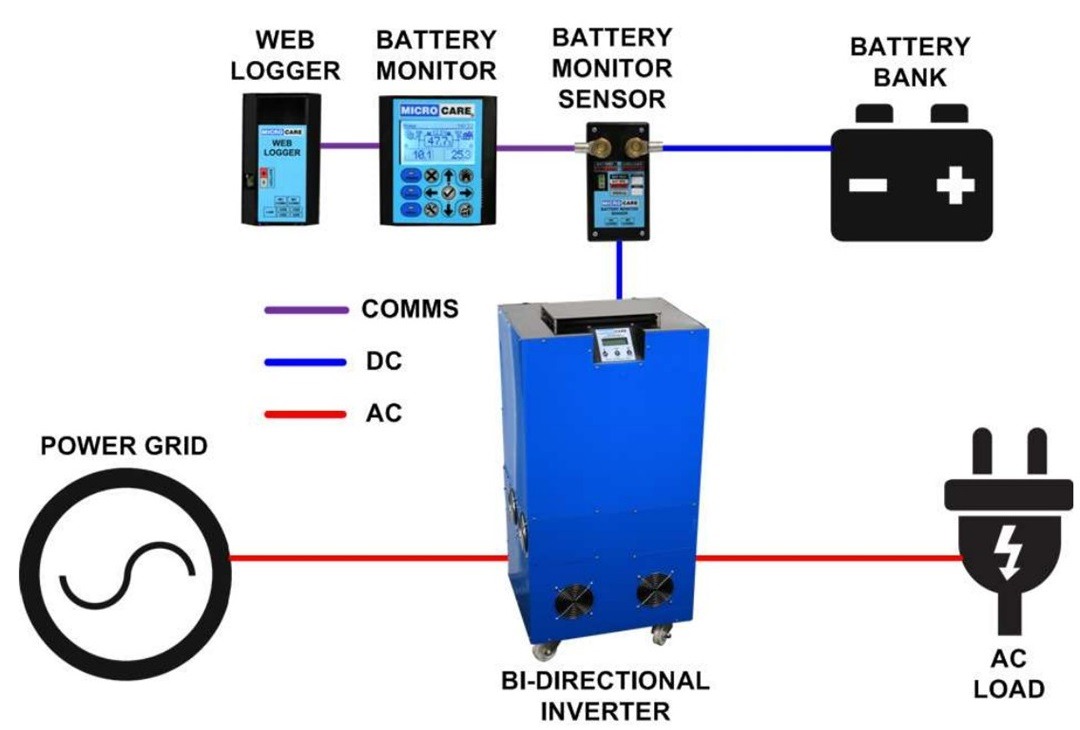 200% Bypass Capability
Microcare Inverters are extremely capable UPS Inverters and have a number of very special features built in to assist in power backup. The Inverter can be set to run at 200% of it’s rated power from the grid when the grid is present.

Adjustable Sensitivity to Grid Failures
A high sensitivity to grid failures can be adjusted with up to a 3ms change over from a grid failure to the load being transferred to running on batteries. 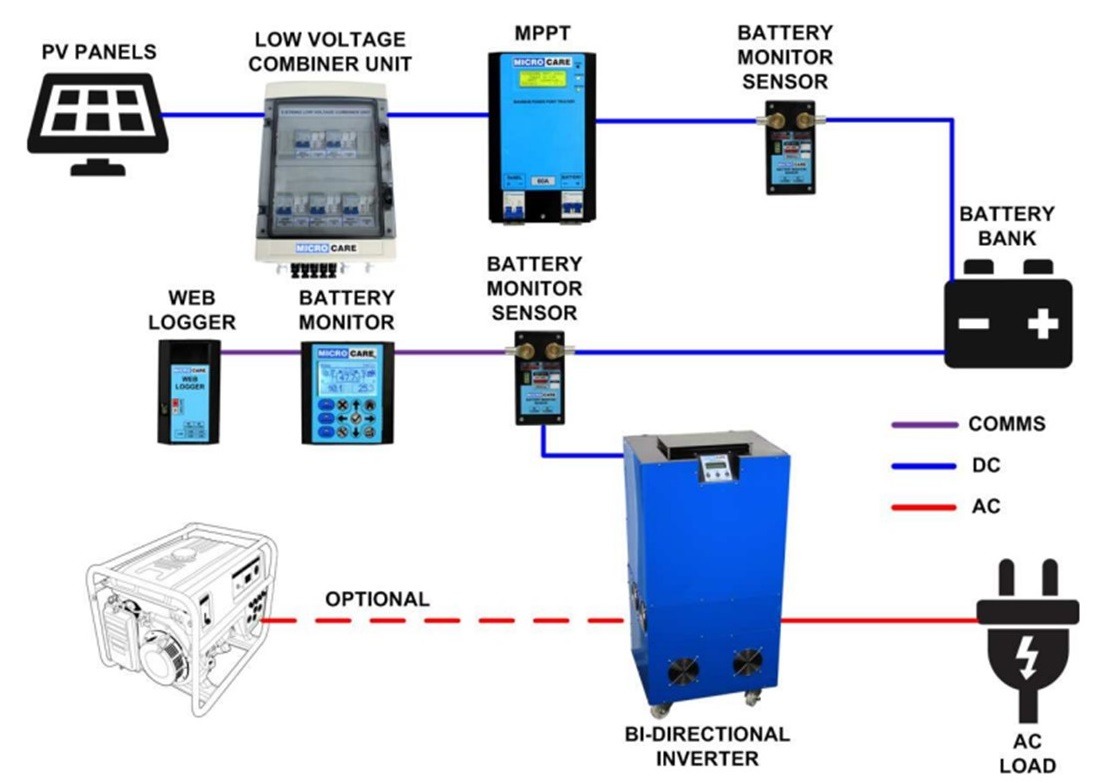 O-Grid Operation
The Microcare Inverters can be used in full off-grid environments where no grid is available in combination with our MPPT regulators.
The Inverters will continuously supply AC power to the load using battery / solar power.

Fuel Generator Capability
The Inverters have functionality and sensitivity settings that can also allow them to be safely connected to a fuel generator to assist in charging the batteries or supplying excess power when required.

Programmable Relay
The Microcare system has the capability to switch a programmable relay through the use of a Microcare MPPT controller based on battery voltages to either load shed specific high loads if the batteries are getting to low or to auto start fuel generators that have the auto start functionality to assist in charging the batteries when solar power is low. 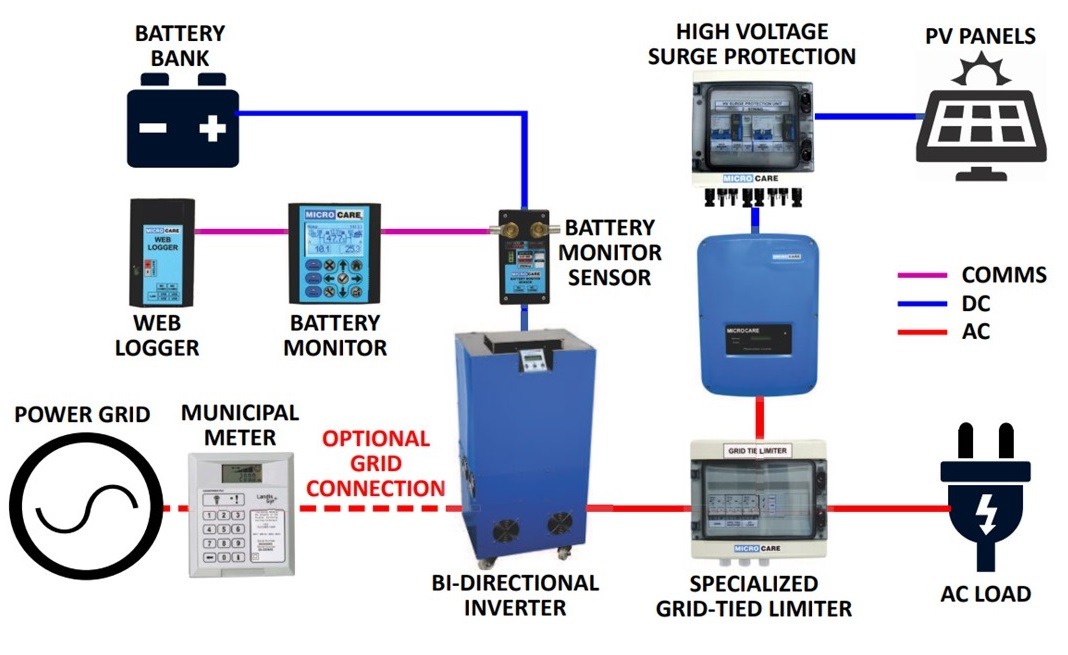 Grid Connected Hybrid Solar Solution
When this system is connected to a grid connection it will operated as a Hybrid Solar System. The power usage priority will be set as follows, 1st – Solar Power, 2nd – Grid Power, 3rd – Battery Power that will be used as a backup only in case of grid failure. Our Grid-Tied Limiter can also be used in conjunction with this option to restrict excess energy feedback to the grid making it safe to use behind electronic and pre-paid energy meters.

Advantages of this Hybrid Solar Solution 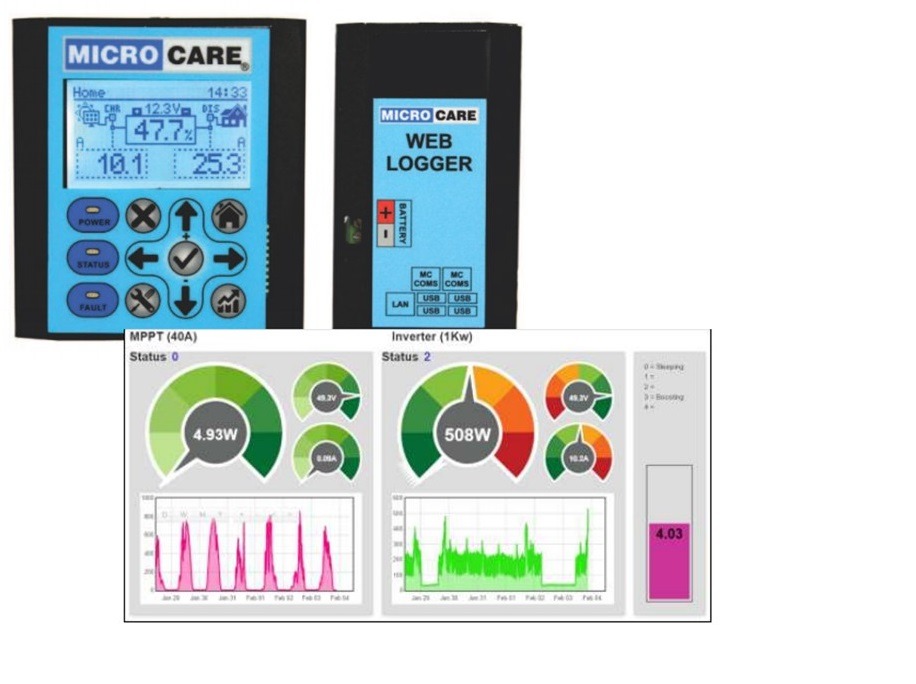 Battery Monitoring and Remote Access.
The Microcare system also has the ability to monitor the charge and discharge of the batteries through Microcare’s Battery Monitoring and Web Logger system.
The exact state of charge (SOC) of the batteries will be calculated on a daily basis with graphical representations and graphs of battery SOC (%), charging (kWh), discharging (kWh), peak charge & discharge amps (A) as well as maximum and minimum DC system voltages.
All the above information can also be available on the internet or your mobile devices through the Microcare Web Logger.